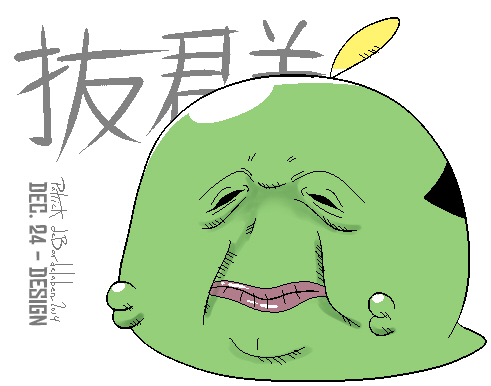 If something like WarioWare were personified as a being that's typically silent, it would be Goku. Goku is all that Japanese absurdity you may have seen in places, but as a character himself mostly stays in the background, so that when he does show up it's just that much stranger. Definitely the strangest and least consistent denizen of Dokio in that he may grow additional body parts he never had or go way way way off model for a panel, or just bend reality in anyway he feels like, all while not saying anything. You could say he's BaBeat in Pokemon form. Perhaps even the spirit of BaBeat?

Gulpin's design is undeniably Japanese. It just has to be some kind of in-joke westerners aren't wise to. I gotta hand it to them for basing a creature off of either an emoticon or throwaway gag face, which is why Goku turned out to be the way he is, rather than playing the "eats everything" angle straight. I mean, so do a lot of Pokemon, there's nothing unique about that.

Goku is from Chibi's Corner.

Man that's a lot of tags