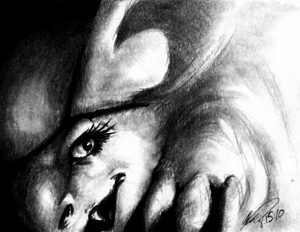 This is one of my Pokemon from Soul Silver. Her name is Utamu and she's an awesome Nidorina.

She lost her right eye battling the Red Gyarados (now in my possession) in the Lake of Rage. Utamu seems to have hold a grudge against the Gyarados (now named Atrocia) and they fight whenever they are together; the fights are particularly nasty because of her Ability, Rivalry, so they can never be in the same party.

Despite her love of fighting, she has a Docile nature; she's pretty motherly towards the other Pokemon in the group, as she's also the oldest member.

The original picture is 2.5x3.5 and it was done in pencil and tweaked in Photoshop CS2