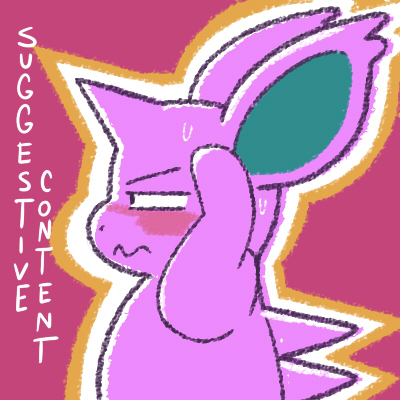 Something I thought about doing for the 4th of July in 2016, but didn't act upon. And now, probably due to a lapse in judgment, it resurfaces as 2017's Independence Day summer extravaganza. One might say I went overboard with secondary animation (which considering my weird clean up process on this one, I wasn't too sure how it would turn out until cleaned up and colored. I'm certainly not doing it over), but it's probably more fitting this way considering what it's based off of. Granted, it was always gonna be a little spicy anyway. :P

The 2016 Concept Doodle. Dori's genes seem to be in full force, here. At the end of the day, though, the point was that Nidorina still looks like a super chipper cartoon character regardless of how "thicc" she was/is. A sultry model look? Get out of town. No amount of bikini dancing is gonna break her character! I think all the characters were gonna do the monkey dance, but Nidorina ended up getting a whole lot more than that.