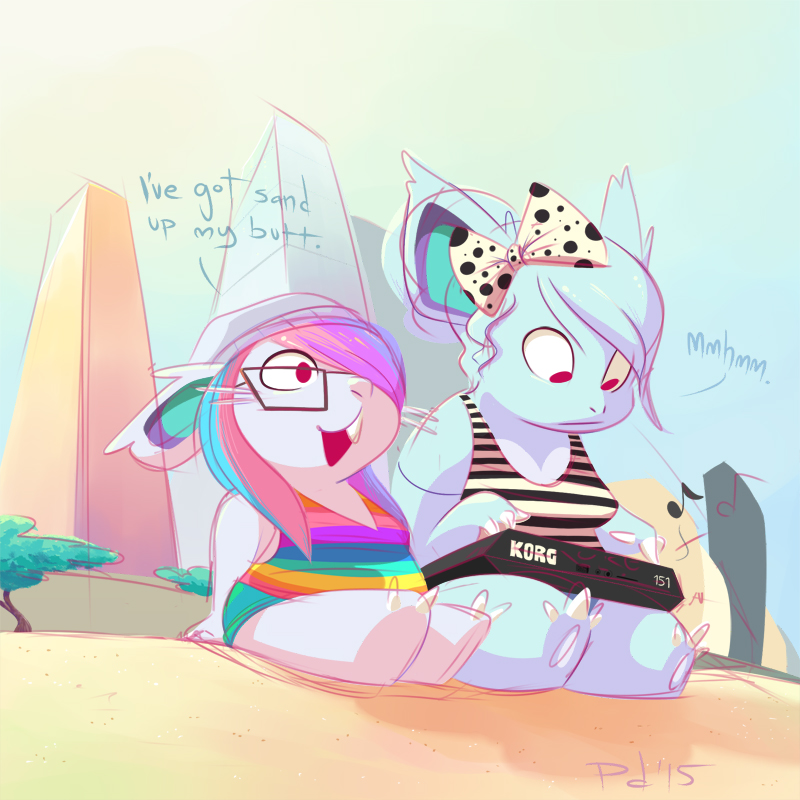 I don't know if I'd call Nidoran Schneider the Second socially awkward, but she certainly lacks self awareness. Maybe that's why Nidorina can handle Charlotte with such ease, she's essentially Didi who can't verbalize her thoughts, though if she could they'd make less sense because Charlotte is essentially alien and a newborn. Nidorina's non reaction is also my favorite part about this; for Nidoran Schneider the First, this is just to be expected. Afterall, Didi did choose to wear or even own a multitude of short shorts. I'm sure one comes in the loud rainbow variety. I'd guess Dee's to rainbows what Charlotte is to plasma balls, they seem to be some kind of stimulant. Finally, no, Nidorina does NOT know how to play keyboard. This is probably something she saw someone on the internet do, so she's trying it out for about a week before she gets bored and moves on, no doubt.

Still in experiment phase, I promised an update, so I decided to post what I have so far. This one's a combination of "lessons". Still a lot more to do, blending, softening, adding lots of details, the background, maybe redoing the sky, appropriate speech implementation... I left the sketch up on this one overlayed just so you can see a bit of where I was coming from. I sketched out the characters about three times to make sure they looked at their most appealing (granted, the first was pure placement).

There's so much to talk about for this one. This is inspired by the Lake Shore Drive area in Chicago, location wise, and from the Girl's Day Mixed Nuts photo comic, my favorite of those, as I always love an amusing female cast. I'm not sure what the actual setting is for this picture, Didi lives with her family on Earth so perhaps it's just some vague city side coast, but it's not too late to Popstar it up and make things more celestial. Not as if these pictures are canon, anyway. Heck, that's why I make fan art myself. Doing the stuff I can't do in the comics. The finished version may also include more of the same Mixed Nuts girls in the background, not sure on that yet, but I really want to if they add to the pic and not take away from.