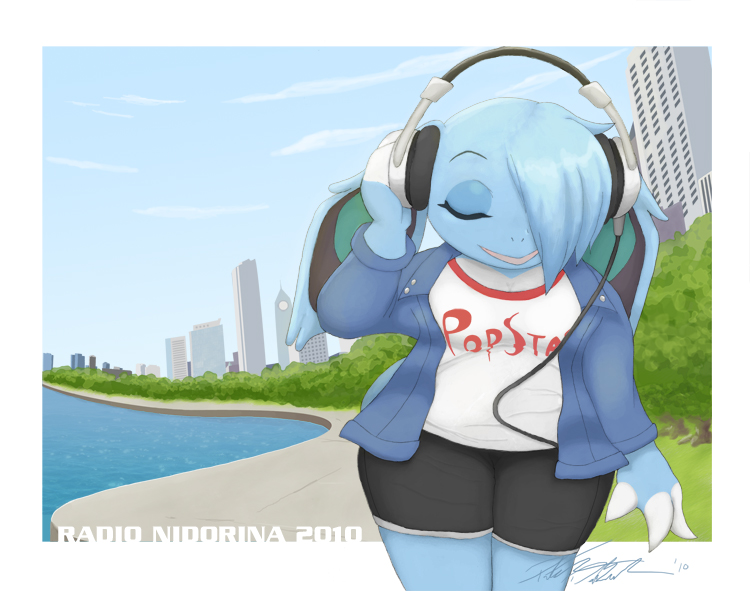 Nidorina is a peppy and friendly young adult who, in the end, usually does the right thing. She tends to be playfully contrary, which may come off as annoying if you can't take a teasing. Nidorina seems to love music, and can often get lost in the rhythm. What's her favorite types of music, you ask? The type of music that tends to overpower her and get her body moving, such as house, trance, rave, and dance.

Nidorina's come a long way. You know, I dunno if I ever said this, but I'm actually rather glad there are fans of "Nido-san" (or AU for some reason) because honestly, if people didn't pay it much attention, I'd've still left it alone like I originally had (and unlike Poke Island I didn't have any attachment to it). Nidorina was more or less known before as combatant who actually opposed to fighting, and could miraculously cut hair, and played big sister. Generally. But these days I've developed her more or less away from that do-it-all angle (much like I did Charlotte) and essentially she's much more like a normal, but relatable young adult. Granted I haven't depicted this much yet in comics currently on site, but trust me, it's where she's headed. And I like to base characters off of real people, not stereotypes, because life has the most interesting people and stories already, and I like to capture that essence in my characters (moreso since the past couple of years).

Because of that, I can honestly say I've grown more attached to "Nido-san", (a nickname I hardly even refer to anymore outside of clarity reasons, and, respectfully, she doesn't even like it ("AAUUGHHH I'M NOT JAPANESE!")) because like the Nidorina before her, putting realism into a character really makes them sing. So, I thank you for your appreciation, I couldn't've gotten here without it.