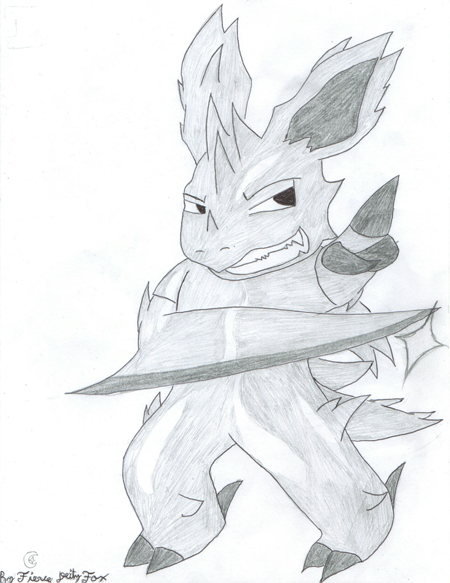 Original description contained within the post/below!

Iron-Rino is one of the mysterious string of bizarre evolutionary changes that alter Pokemon geneology in strange, sometimes astounding ways. This evolutionary string was first seen in Eevee when it was introduced to elemental stones and in a way, Iron-Rino is a relative of Eevee. In Iron-Rino's case he became a Steel/Poison type. This, in theory, happened because he had a very high iron food content, similar to Aron.

Unlike Aron however, Iron Rino is capable of more actively useing his metal composition, almost like the Terminator movie's liquid metal T-1000. He is still an organic creature so he cant melt himself into a puddle or anything that over the top and has some limits to his metal morphing ability. It depends on how much iron he has in his system. In actuality, the metal on his body is really a shell of sorts that surfaces on his skin as he consumes iron, so the more he eats the more he can use. He is capable of useing all steel type moves with Steel Wing being an obvious exception and Mirror Shot and Flash Cannon being his favorite moves and Meteor Mash is so called "Super Move".

He is also quite reinforced physically and is capable of impressive feats of super human strength, reaching close to a Machamp in power, surprising for his somewhat small size. Whats most impressive is his ability to take a beating unlike any other. To that effect, he actually enjoys leaping from high points to see how many flips ad tricks he can perform and then land on his feet. Enjoys Almonds, Spinich, danceing, wrestling, and adventure!

Iron Rino describes himself as about as awesome as a pokemon can be and also quite the ladies man, which is true on both ends to some extent. He is rather selfless looking to help out whenever he gets a moment, he is polite, especally to girls, and is usual cool with whatever anyone wants to attempt. A nice guy over all, so much so that AU's infamous Blade Knight inc. is a close friend of his! One might describe him as a modern day knight in pokemon form. Like anyone though, he isnt perfect. He is rather harsh on himself so if he ever screws things up he often pouts for an hour or so, he tends to very openly state flaws in people, an example being "dang, thats a BIG ZIT youve got!" which often gets him into trouble.

He is also somewhat vain, as he admires himself far to much, particularly when he is nice and shiney and will continuously polish himself in his free time. Oh and he has a major crush on Charlotte but is too chicken to admit it, especially when he found she has a crush on Ness. oh whatever will he do? STAY TUNED TO FIND OUT!