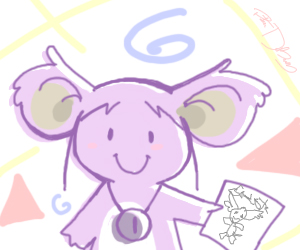 Is it me or is Charlotte getting younger? I mean, when conceptualized she was some deadpan 16-18 year old even though she only had the mentality of a two year old. These days, though, I can't help but portray her as a 4-6 year old in artwork. If I knew she would turn out this way I probably would have made her a child to begin with. Well, that's what happens when characters get developed after design... At least now I've compromised enough to make her at least appear 15 without drastically doing an age reduction.

Nevertheless, I love this illustration. I could probably draw for childrens' books. And you know what? I wouldn't be opposed to that, either.