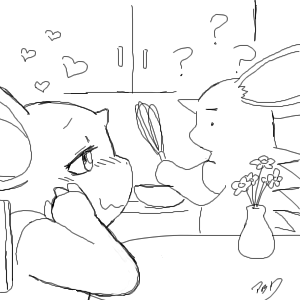 It's natural for individuals to notice someone good looking when they pass by, or even have crushes on celebrities, even if they're already in a relationship or marriage. The key is not to dwell on that, though. There are some people, however, who aren't like this at all. And even further, some are only attracted to the one they fell in love with. It's a real thing.

Nidorina is one such person. She's worked with actors and has been hit on by various people throughout the series, but she's generally oblivious. And even when she does catch on, she just giggles and compares their attraction to a childish crush without showing any interest. She has never, and I mean NEVER seen anybody as attractive outside of her very own husband, Nidorino, who is basically her knight in shining armor as her case may be. It's true that she may be wearing tinted glasses per se, especially because Nidorino was at the right place as the right time, but she's not blindly in love with him, and knows he has faults. Still, it really says a lot to her girlfriends when they talk about hot soap opera leading men, and all she can talk about is how much hotter Nidorino is. They wish they could love their husbands as much as she loves hers. He drives her crazy at times, and he doesn't have to do anything more than smile warmly.

She thinks of Nidorino on a daily basis, because she cares a great deal about him and his well being. She's always excited to receive a phone call or see him via webcam (unless the reason for contact is bad news). Nidorino doesn't fully appreciate Nidorina's love for him and just how fortunate a husband he is until late in the series. All the little things, and the big things... everything counts. She always made sure he knew she loved him, there's never a promise of tomorrow, after all. All marriages could at least learn from this. So in this picture, Nidorino tries to show his appreciation by making her breakfast, but is absolutely stumped on what a whisk is or does. The meal WILL end in catastrophe, and she knows this. But you know what? She loves him just for the thought.