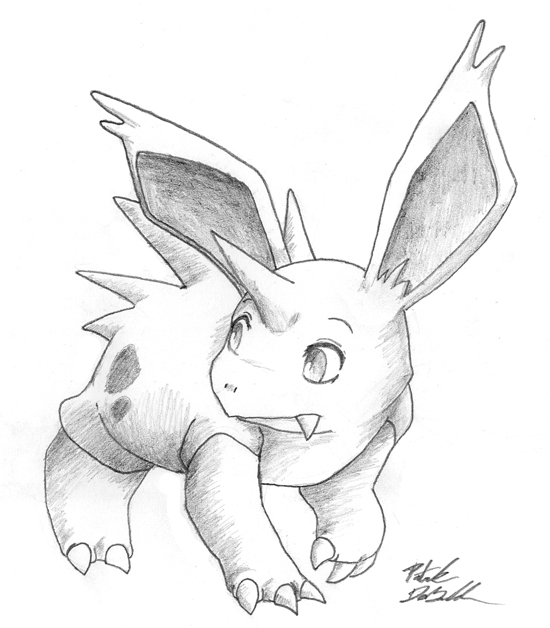 Nidorino's instincts clearly defy what researchers spent all their time classifying as normal, and no, it's not just to stomp on the efforts of biologists. Even if he is a peaceful fellow (save for under stress), he will do whatever is necessary to defend his family. He's well known in the Poke Forest, and a friend to everyone. He's a handsome guy, definitely young looking and possibly a pretty boy (but not "dude looks like a lady" pretty). His cute appearance is strange for a fact, but no one seems to be shocked about this like they were for Nidorina. Women think he's cute, married or not. Guys wish they had his youthful looks (if only because they don't wanna look crusty when they get a certain age). Nidorina thinks he's "surface of the sun" hot, which might explain the rapid child births. But on the plus side, they're gonna have offspring so beautiful that you can't look at them directly without your face melting, and if they breed enough, they can create a whole new species of face melting Nidos. You can't tell me that's not a cool sounding concept.

In the end, he isn't vain, for no matter what anyone thinks of him, he's just a calm and caring guy. One who works a lot, too. Boy, do I know what that's like.