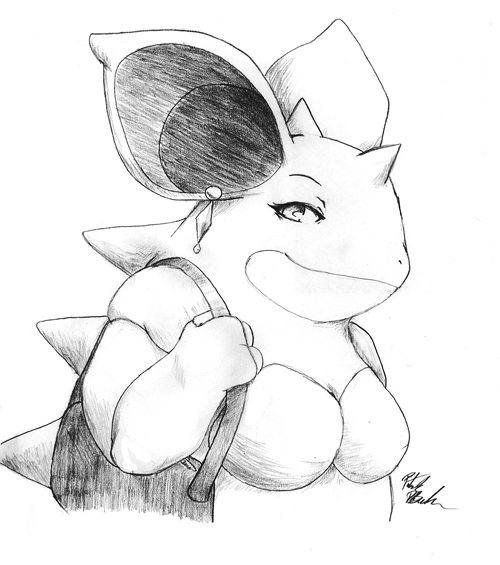 In ritzy Sunset Coast City lives a Nidoking and queen couple of royal decent. Like most characters in the Poké Island et. al series, their names are the same as their specie. Though they have royal blood, they chose not to live the life of monarchy but moved away (despite the wishes of their family) somewhere quieter. Well, quiet and extremely posh. They own one of the many mansions there, but unlike a lot of the people who live there, they do not place themselves on a pedestal above those who live anywhere else.

Like all the other major Nidos of the series, Nidoqueen has a more feminine appeal than the typical. I dunno why I did this, I mean, I could've made them look normal but I guess not. Then again, looks alone didn't help Nidoran and Nidorina any in the beginning anyway. Still, Poke Island seems to breed cute looking individuals. Even the Raticate on the island are cute. Maybe that's why they keep themselves hidden from mainland. Also, like every other creature, clothes are optional. It really makes no difference if they wear them or not, but Nidoqueen often gets dressed up just because she can afford high fashion clothes.