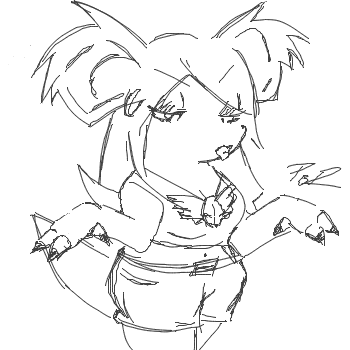 Drawn back when I was getting more into anatomy and stuff. I also got tired of drawing in official-esque styles (hint: one of the reasons the Carmela comic became boring to do). I hate restrictions, and being on model at all times. Only money grubbing regimes force that kind of stuff on anybody. Now don't get me wrong, guidelines are fine, I try to keep characters at identifiable and within noticeable silhouettes (in this case, a Nidorina should still LOOK like one), and certain rules should be followed. Being all willy nilly without rhyme or reason is just as bad as being the equivalent of an artistic Stalin.

As an interesting note, this doodle would set the standard of how Carmela should appear henceforth. Sure, adding clothes puts her on that fence of being a morph which I don't like, but it couldn't be more fitting for her character so it stays. Plus, without the clothes she'd look like any other Nidorina so it's all good.