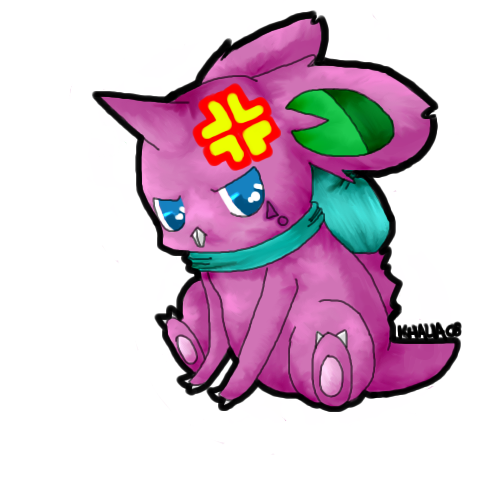 A gallery spotlight for a half complete gallery!

(Pictured above: Fwoozles by Khalia)

I'm currently working on getting the Mixed and Other gallery up to date, and it'll still be a while before it's 100% complete, but why don't we take a step back and take a look at what's here now?

Over the years I've always stressed that Aqua Bunny was never a personal site, and was meant for people to upload works on. It's really easy to make OCs using Pokemon, because, first of all, they don't have much personality from the onset, existing as bioweapons to defeat opponents in turn based battles or to collect like Funko Pops, and not a whole lot else. The blank state status is what ended up making auxiallry media for the Pokemon franchise a lot better when they care to try, usually in the manga (especially in Yamashita's 4koma), and sometimes the anime when it doesn't feel like they're just checking creatures off a list. Secondly, seeing as Pokemon exist as a species and not really as individuals, you have a lot more freedom in creating the sort of Pokemon you want to star in you works. After all, two dogs or two cats could have vastly different personalities, why would things be any different here?

In an effort to show what other people have done with Nidos years ago, I decided to show off some of the fan art I got many years back. For anyone new to the site, this'll be new to you, and for anyone else, the old site was kinda hard to get through anyway (or you just went straight to some animation page and skipped the rest), so maybe you missed it. Check it out!

You can view the works of these various artists and more, along with the author's descriptions by following this link!