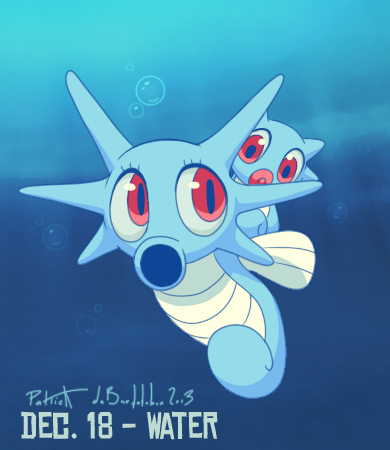 Like Vulpix and Nidorina, Horsea has had the title of favorite water type for years. I just don't draw them often. These two aren't really main characters, but are a good example of what Poke Tales was known for, which is to provide a story for all Pokemon, even if this placed them into One-Off status. The Horseas show up more than once, but they didn't do anything you haven't seen Nidorina do with her children, just under the sea and a with a lot more danger.

Mama and Baby Horsea are from Poke Tales.

Figuring everyone would be as tired of the same old Nidos as I was for drawing them this holiday, I decided to do a deeper pull and used Mama and Baby Horsea instead. Went for the old Pokemon Blue Sugimori art style, here, looks pretty nice, ngl.